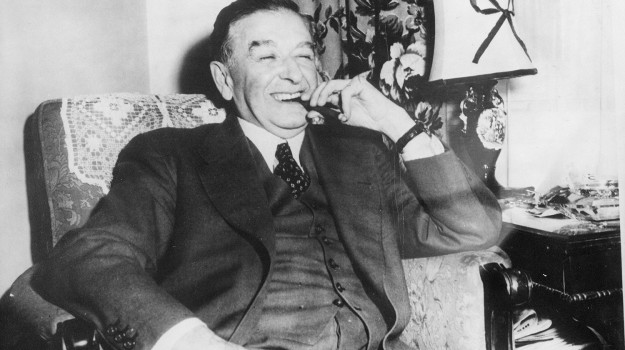 Maurice Duplessis’ tenure as premier of Quebec (1936-39, 1944-59) is commonly referred to as le grande noirceur (the great darkness). Born in Trois-Rivières in 1890, Duplessis obtained a law degree at Université Laval in Quebec City and worked as a lawyer in his hometown until he entered politics in 1927. For nearly two decades, he employed a combination of patronage and repression to remain in power, and he used violence and intimidation to undermine unions. In 1937, he introduced An Act Respecting Communistic Propaganda, called the Padlock Act, which prohibited printing or publishing any document (including newspapers and pamphlets) that promoted communism. Because Duplessis was Quebec’s attorney general as well as its premier, he could order the closing of any premises that was suspected of producing subversive material. There was no process for appealing to the courts. Because the Padlock Act did not define the word “communism,” Duplessis was free to use it against anyone who criticized him, including trade unionists and the religious minorities whom he despised. Jehovah’s Witnesses, whose attempts to proselytize (often on people’s doorsteps) earned them the enmity of most Quebeckers, were routinely prosecuted and jailed, often for seditious or blasphemous libel. Duplessis eventually became embroiled in a legal battle with Frank Roncarelli, a restaurant owner whom he persecuted for providing bail to Jehovah’s Witnesses, first by charging him with sedition and later by having his liquor licence revoked.

As premier, Duplessis ensured that the church kept a tight grip on education and social services throughout the province. One of his most notorious abuses involved transferring orphans to psychiatric hospitals to secure federal funding, which was more generous for hospitals than for orphanages. Healthy children were diagnosed as mentally unfit and sent to mental hospitals. In some instances, such as Mont-Providence, entire orphanages were reclassified as psychiatric institutions. His audacity knew no bounds. In February 1951, when a six-hundred-metre bridge collapsed in Trois-Rivières during -26 degree weather (killing eight people), the premier, who had commissioned the bridge amidst charges of corruption and named it after himself, blamed the collapse on communists.

Duplessis was responsible for some of the most infamous examples of state abuse of civil liberties in Canada’s history. His actions generated intense criticism and contributed to the creation of the first civil liberties groups in the country.