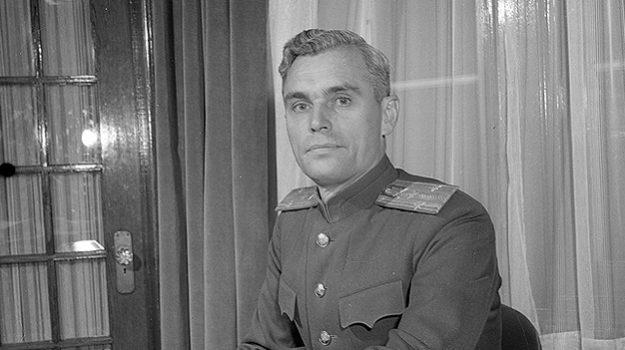 In 1945 a young, frightened Russian cipher clerk working in the Soviet embassy in Ottawa left one night with several top-secret documents clutched secretly beneath his coat. Igor Gouzenko carried a terrible secret with him, one he hoped would buy him asylum: evidence of a Soviet-led spy ring operating in Canada. In response, the federal government instituted a royal commission to track down the spies. By invoking the War Measures Act in peacetime to detain suspects indefinitely, and implementing a royal commission to interrogate them, the government succeeded in circumventing the judicial system [royal commissions can force individuals to testify and can deny witnesses access to legal counsel – the commission’s transcripts were later used at trial to prosecute the accused]. The following documents are related to Gouzenko’s defection and the subsequent espionage commission.

25 September 1945, Department of External Affairs memo on the legality, under international law, of holding a defector from the USSR.

Canadian embassy in Washington: Reports on reaction to the defection and espionage commission in the United States:

July-August 1946, correspondence between Senator Arthur Roebuck and Minister of Justice Louis St. Laurent regarding the detention of several suspected spies.

Igor Gouzenko’s official statement to the RCMP on 10 October 1945.

The following oath was taken by all the RCMP officers who were detailed for guard duty at the Rockcliffe Barracks, where the suspected spies were held under the authority of the War Measures Act.

The royal commission’s mandate as defined in PC411.

The Final Report: A complete copy of the royal commission’s final report.

Excerpts from the interrogations: What motivated the accused to spy for Russia? and Testimony from sitting Member of Parliament Fred Rose.

2. That the proper authorities in each Service, Department and Organization take such steps as may be considered desirable and effective, in the light of this Report and the Evidence and Exhibits, to prevent further unauthorized transmission of information and to set up further safeguards.

7. That the practice and procedure in connection with the issue of Canadian passports revised.  While not elsewhere referred to in this Report, we have evidence indicating that naturalization and birth certificates have also been improperly obtained.  We therefore suggest that the conditions surrounding the issue of these documents might be the subject of consideration by the proper authority.”

Update on the status of the spy trials, 29 September 1947 (source unknown).

The press became increasingly critical of the government’s actions following the publication of the first interim report on 2 March 1946, which revealed that David Shugar and eight other suspects remained interned at the RCMP’s Rockliffe barracks. A key theme in the media’s coverage was the suspects’ civil liberties. The media wrote about, among other things, family members’ attempts to contact the detainees, lawyers criticizing the government for preventing them from speaking with their clients, and Matt S. Nightingale and Fred W. Poland‘s relatives failed attempts to secure writs of habeas corpus in court to force the government to release them.

A survey of six English-language papers found 8 to 15 editorials each on the espionage affair within a two-month period. While editors for the Montreal Gazette and Halifax Herald were quick to support the government’s actions, editors for the Winnipeg Free Press, Vancouver Sun, Evening Citizen and the Globe and Mail criticized the commission’s tactics. In contrast, the affair received limited attention in French-language newspapers. Le Devoir provided limited coverage of the commission and the spy trials, but the issue rarely hit the front page of the paper, and the newspaper rarely discussed the restrictions on the suspects’ civil liberties. Action Catholique, for instance, did not comment on the issue at all. The only story that dealt with the commission was an editorial that pointed to the defections as an example of French-Canadian moral superiority (all of the spies were English-Canadians).

Daily papers were not the only ones to comment on the espionage affair.  The following journals all printed stories on the exploits of the commissIon and all of them were critical of the commission’s extreme tactics: Saturday Night (weekly):

The following collection of position papers were produced by...

Documents relating to the defection of Igor Gouzenko, the RCMP...

Few social movement organizations can equal the impact of the...

Documents regarding the federal government’s use of the War M...

Special Joint Committee on the Constitution

The Special Joint Committee on the Constitution (1980-81) solicited...

The State Funding for Social Movements project is a five-year...