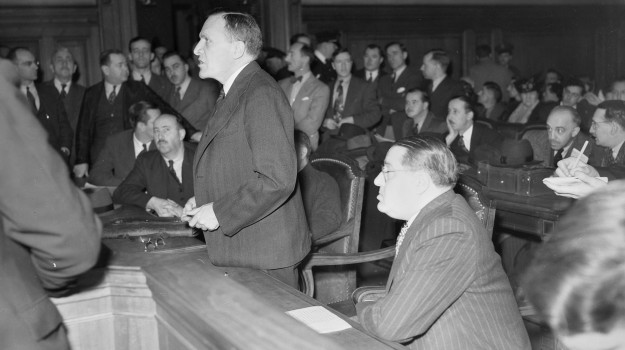 Jacob Lawrence Cohen is a particularly interesting figure because his name often appears in studies of various civil liberties causes in Canada. He was a Toronto lawyer who staunchly believed that Canadians needed greater legal protections against the state abuse of civil liberties. Cohen wrote articles for the Canadian Forum and was an active member of the Toronto Civil Liberties Union. During the Gouzenko spy trials, he served as defence counsel for several of the accused, including Gordon Lunan, Matt S. Nightingale, Fred Rose, and Kathleen Willsher.

“J.L. Cohen, one of the first specialists in labour law and an architect of the Canadian industrial relations system, was a formidable advocate in the 1930s and 1940s on behalf of working people. A ‘radical lawyer’ in the tradition of the great American counsel Clarence Darrow or contemporary advocate Thomas Berger who represent the less powerful and seek to reform society and to protect civil liberties, Cohen was also a ‘labour intellectual’ in Canada, similar to those supporting Roosevelt’s New Deal in the United States. He wrote Collective Bargaining in Canada, served on the National War Labour Board during the war, and advised the Ontario government about policy issues such as mothers’ allowances, unemployment insurance legislation, and labour law. As a Marxist and a Jewish immigrant, his commitment to the labour movement resulted in part from his background and was deepened by his experience of the 1930s Depression. His was an unusual perspective for a middle class professional, and his ethnic origins and his political views subjected him to discrimination. Though respected professionally, he made enemies. At the end of the war, Cohen was convicted of a criminal charge, was disbarred and later reinstated, and died suddenly in 1950 at the age of fifty-three. Though he rose to the top of his profession, he had a difficult, complex private life that contributed to his personal disgrace and professional downfall. His obituary in the Globe and Mail described him as a dynamic, sharp-witted man who rose from humble beginnings to become the most influential labour lawyer in Canada, and it concluded with what may be a fitting epitaph, ‘He championed all the wrong people in all the right things.’”

Library and Archives Canada has a collection on Jacob Lawrence Cohen.