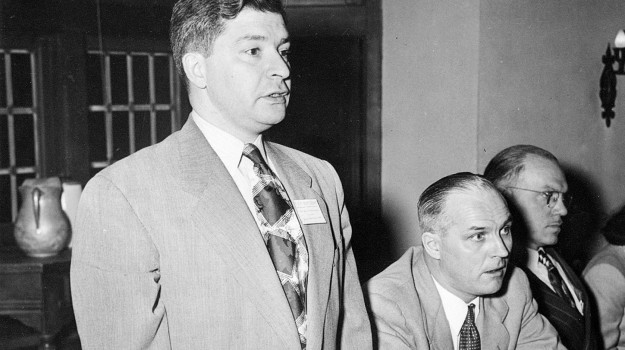 The following is an excerpt from the Library and Archives Canada catalogue’s biography of Kaplansky:

“Kalmen Kaplansky was born in 1912 in Bialystok, Poland. He graduated from D. Druskina high school in 1929, and emigrated to Canada in December of that year. A printer by trade, Kaplansky worked in Montreal as a typesetter and linotype operator during 1932-1943. He was a member of the Montreal Typographical Union, Local 176 of the International Typographical Union, serving on the union’s executive and as a delegate to meetings of the Montreal Trades and Labor Council and the Trades and Labor Congress of Canada. Kaplansky was the secretary of the Montreal District Council of the Labour Party of Canada (Quebec Section) during 1936-1938, and was chairman of the Workmen’s Circle in Montreal during ca. 1940-1943. He served with the Canadian Army during 1943-1946; while in the Army, he stood unsuccessfully in the 1944 Quebec provincial election as the Co-operative Commonwealth Federation (CCF) candidate in the riding of St. Louis. In 1946, Kaplansky was appointed National Director of the Jewish Labour Committee, a position he held until 1957. Through his postwar work with the JLC, Kaplansky took a leading role in building the human rights movement in Canada. During the 1940s and 1950s, Kaplansky and the JLC helped to organize Joint Labour Committees to Combat Racial Intolerance in several cities. Working closely with Kaplansky and the JLC, these joint labour committees (and related provincial bodies, such as the Ontario Labour Committee for Human Rights) investigated complaints concerning discriminatory practices, organized support for human rights legislation, and sought to educate the Canadian public on human rights issues. Returning briefly to politics in 1950, Kaplansky stood unsuccessfully as the CCF candidate for a federal by-election in the riding of Cartier.”

Kaplansky also served as the Canadian labour representative to the International Labour Organization and was the chair of the National Committee on Human Rights. He played a major part in the celebrations surrounding International Year for Human Rights in 1968, which led to the formation of several human rights groups in Canada, and was involved in the abortive Canadian Council on Human Rights. Kaplansky died in 1997.

According to Ruth Frager and Carmela Patrias, in “This Is Our Country,”

“Kalmen Kaplansky, executive director of the JLC from 1946 to 1957, played a decisive role in shaping the Canadian labour campaigns along specifically Canadian lines. Notwithstanding his early training in the United States, Kaplansky was acutely aware that the ethnic make-up of Canada’s population called for distinctive Canadian content and distinctive approaches in the human rights campaigns. He believed that, because the Jewish community in Canada was so much smaller than the one in the United States, human rights campaigns in Canada would depend more on active participation by non-Jews. Special efforts were necessary to reach French Canadian and other Roman Catholic workers. At the same time, the small size of the African Canadian community meant that discrimination in Canada was far less visible than in the United States. Kaplansky believed that, in spite of their good intentions, Canadian labour activists and members of the CCF, like other Canadians, were insensitive to the extent of racist, ethnic, and religious discrimination in their country. Workers of eastern European origin, such as Ukrainians and Poles, were not represented within the leadership of trade unions, despite their numbers. Consequently, Anglo-Canadian trade union leaders and social democrats often remained insensitive to the existence and damaging consequences of non-violent discriminatory acts such as the denial of equal access to economic opportunities, educational institutions, or recreational and social facilities. As members of the dominant groups in Canada, they saw the treatment of Japanese Canadians in British Columbia and the excesses of the Orange Order as aberrations.”

Frager, Ruth, and Carmela Patrias. “‘This Is Our Country, These Are Our Rights’: Minorities and the Origins of Ontario’s Human Rights Campaigns.” Canadian Historical Review 82, 1 (2001): 1-35.

Library and Archives Canada has a collection for Kalmen Kaplansky.